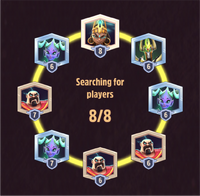 Battles are part of Tournaments which vary in rules, mechanics and rewards. They are divided into rounds and one round consists of three phases: pre-battle formation phase, battle phase and rewards phase. In the pre-battle phase, Champions can be placed in the arena, Legends can be swapped and both can be levelled up. The rewards phase occurs after battle when players receive new artifacts or Character Cards.

The progress within any of the tournaments is not interrupted if the game is closed between battles.

If a Legend is switched between battles, Health is recalculated automatically.