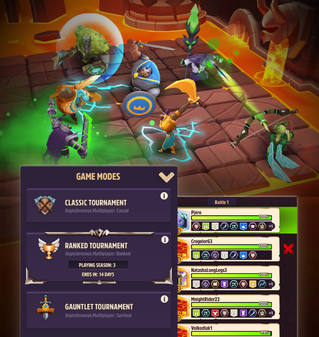 In Classic Tournament mode, you battle against other players in turn until there is only one Legend left standing - the tournament winner.

In Gauntlet Tournament mode you have to beat your opponents one-by-one in order to win the tournament.

If you lose a battle, your opponent deals Damage to your Legend. When your Legend’s Health is reduced to 0, you are out of the tournament.

This is like the Classic Tournament format, but with the addition of a skill-based progression system. During a season players rise (or fall) through the ranks, based on their performance against other players.

Reaching the Mythic rank grants you access to global and local leaderboards, where you can compete against the best of the best in a battle to be recognized as one of the greatest Mythic Legends players in your region, or even in the whole world.

If and when you reach Mythic rank, you qualify for a place on the leaderboards, where you can compete for local or global top spots against the best Mythic Legends players in the world.

If you’re on the Gold, Platinum, Diamond or Mythic rank, and you’re inactive for more than 1 week, you gradually lose trophies, and can drop to a lower tier or lose leaderboard places.

In Ranked Mode, you collect trophies and progress through ranks for the duration of a season. When the season ends, all rankings are reset.

At the start of a new season, your starting rank is based on the rank you achieved during the previous season (see table below), so you don’t start each season from the lowest rank.

If you skip a season or seasons, then your starting rank next time you start a season is lowered by 2 ranks for every season you missed.