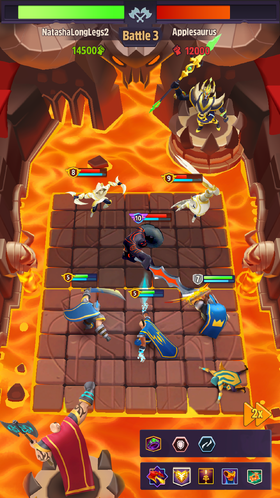 A Champion or Legend’s Health value indicates how much Damage that Legend or Champion can take before it is defeated.

Under normal conditions, the Legend or Champion dies when their Health reaches 0. There are few exceptions: Hasgard’s Second Chance ability allows him to resurrect after his health reaches zero, and all Undead Champions will survive for a few seconds with 0 Health if the Bone Charm Artifact is equipped.

Health can be replenished using various healing and life-stealing Abilities.

A character’s total Health can be increased by using some Abilities and Artifacts.

Reduces the amount of Damage received. The minimum value for Defense is 1.

This calculation can be useful if you're faced with a choice between a Health bonus and a Defense bonus, and want to figure out which will be most beneficial to your team.

The Damage value indicates how much Health is lost by a Champion affected by a particular attack or action.

Damage received is usually less than the basic Damage value of the attack because most attacks are affected by the Defense of the damaged Champion.

In Classic Tournaments the Damage dealt to the losing Legend is calculated at the end of each battle, and is based on the combined levels of the remaining Champions on the winning team, the winning Legend’s level, and the battle number.

In Gauntlet Tournaments, Legend Damage is only calculated when you, the active player, lose a battle. When your opponents lose a battle, they are immediately eliminated from the tournament.

In battle 5 of a Classic Tournament, a Level 6 Legend wins with 3 level 4 Champions remaining. The winner deals 90 Damage to the losing Legend.

Mana is required in order to trigger Abilities. When a Champion’s Mana bar fills to the top, their ability triggers automatically and the bar empties.

A Champion’s Mana bar is empty at the start of each battle, and fills when that Champion deals or receives auto-attack Damage. The capacity of the Mana bar varies from Champion to Champion.

A few Champions (e.g. Hasgard, Eishan) don't have Mana because their Abilities are triggered by other specific conditions.

Formula for calculating Mana received for each auto-attack performed.

Capped at 10 for all Champions except Priests and Sorcerers, for whom it is capped at 20.

Capped at 70 for all Champions.