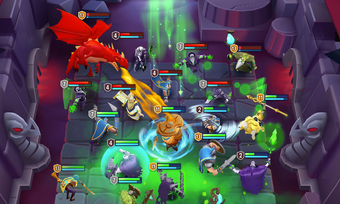 Champions are placed on the tiles of the arena at the beginning of battle, and when battle begins, they fight and move around the arena automatically.

Outcome of the battle depends on:

Fighting, movement, and the casting of spells, abilities and artifacts all occur automatically.

After every battle, a selection of rewards such as artifacts or Champion Cards become available.

Levelling up Legends also improves their Health and their abilities. Legends can be selected, but they cannot be changed during a battle. Legends can work with any combination of Champions.

Legends have Health, just as Champions do, and every time a battle is lost in a Classic Tournament, the Health of the Legend is diminished.

Stats are comprised of:

Artifacts are buffs (boosts) that are awarded after battles. They last for the duration of one tournament, and at the end of a tournament, they are automatically exchanged for prestige. Duplicates always fuse to become more powerful versions of the original artifact.

Every Champion belongs to an Origin and a Class. If more than one Champion of the same Origin or Class is placed in the arena, an Origin or Class synergy is created. Synergies provide buffs (boosts) to Champions and enhance performance.

Reward cards are usually found in reward chests. They contain both currency and Character Cards.